A downloadable game for Windows, macOS, and Linux

The town has been overrun by evil snowmen! All the citizens are too scared to go outside during the Christmas times! Only Santa and his trusty shotgun can save them!

Santa Gets A Shotgun is a game I made over the span of a week to "celebrate" Christmas. I saw it as some kind of game jam for myself!

Bit crazy, but it was so much fun!

Reply
euphymoon51 days ago
I had a fun ti
i had a fun time!
Reply
Gamering239208 days ago

really wish this would get new things

Possibly a boss battle at level 30? maybe an enemy that shoots a ton of snowballs and turns slowly? having its design be similar to a tennis ball launcher.

I would need to rethink the controls for a mobile screen and do a lot of backend stuff to optimize the game to run on mobile devices. I would also basically need to remove all the multiplayer stuff because I can't support that on an Android as of right now.

What it basically all boils down to is that it would take a lot of time. Time I don't have, unfortunately.

Ok, I understand, thank you. People like you make my life worth it. You see, I have been diagnosed with clinical depression which has almost caused me to end my life, 3 different times. This sort of thing is what keeps me going. Once again, thank you for giving me a reason to keep living.

I'm sorry to hear that, and I'm glad I can help a little bit! Just hang in there! It gets better eventually!

Almost 30 (died from my own grenade XD) 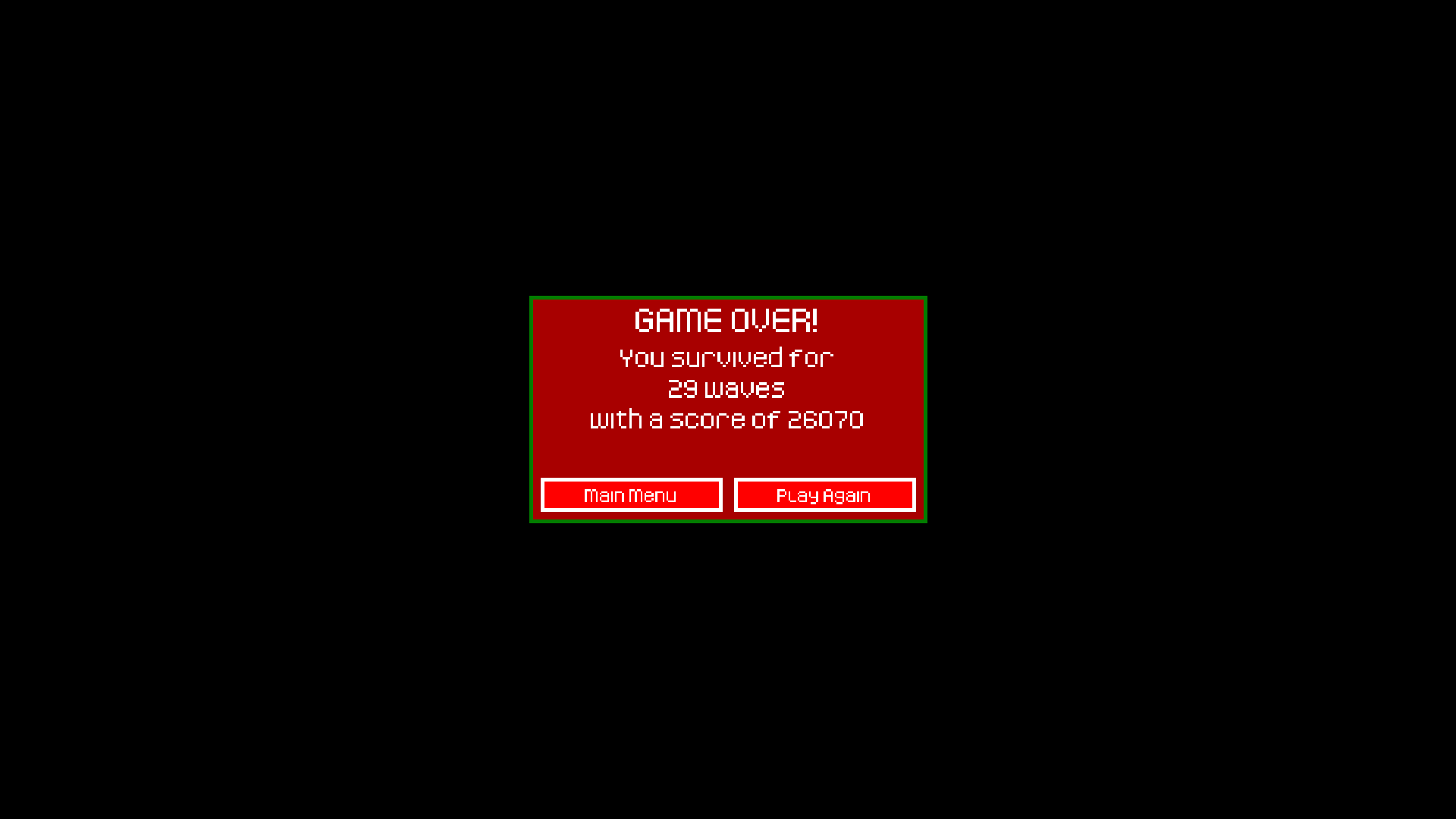 Also i maxed it out! It1s the second christmas that i play this hidden gem, really enjoyed it thanks!

I'm glad you enjoyed it! Thanks for playing! :)

how to play multiplayer :3

I'm sorry that it took me so long to respond!

You'll need to open the TCP port 7777 in your router. (not something I'll teach you as it differs from router to router) Then just can just go to https://www.whatsmyip.org/ and see your public IP. Send that to your friends and they should be able to connect.

I maxed out the game it was really good!

So this is what Santa does when he's not delivering gifts....Haha but in all seriousness I really enjoyed this game! Keep it up!

It was really fun to watch you play! Thanks for playing and sharing your video! :)

Of course! Thanks for making a great game!

Wow this was dummy fun, my dude. Gotta get my friends to download it now!

It was absolutely an amazing game and a blast to play. I honestly did not expect to have that much fun with it, but it was just that great.

My only issues with it were taht the meshes for the snow people seemed too tight? And so a lot of shots that should not have missed, missed. And the shotgun had the same issue where you had to hit it exactly in the middle as even though the animation of the bullets were spread, it didn't have that effect practically and would only do damage if you hit exactly in the middle. And also that you had to be literally two feet close to the snowmen for it to actually hit them. And add all of that with the snowmen having perfect aim, it can be unfair.

Other than that, it was a great game and a tonne of fun. I am really so glad ot have stumbled across this. Great game and good luck!

Hi there! I'm very glad that you've enjoyed the game!

As for the shotgun problem, I know about that problem and I know how to fix it... I've just been very lazy and not fixed it. I should really get to that. I didn't expect this game to be this popular every year to be honest. :P

FESTIVE LOL This was a lot of fun to do

Hehe we played it for Xmas and it was very fun Thanks !

Great video! I really enjoyed it!

I also noticed you were playing a older version. Is this a per-recorded video from last year or did you somehow get an older version?

Happy you enjoyed the video, yes we recorded the video last year, I believe we recorded it before the update so that is why it was the first version or at least the second version of the game you made originally. I just know we recorded it way back on the 19th so didn't come out till now because we either had too many videos but not enough days to fit all of them into the Christmas videos line up so it was pushed out until this year or we didn't have enough time last year to edit everything. We were a lot less organized last year so some videos kind of just sat till now.

I cant get multiplayer to work

What seems to be the problem?

Remember that the host needs to port-forward the ports 7777 on both TCP and UDP. This is generally the main problem. Hope it helps!

I had so much fun with this game, good job! Hope you enjoy my video, and Merry Christmas!

Surprisingly fun! The movement was a bit slow, and the shotgun didn't feel very punchy, but aside from that a fun game!

We had a blast playing this game and sorting out the mechanics!!   Just the type of Christmas game that piques our interest!!

its not letting me launch the game

Make sure your anti-virus doesn't quarantine it. If you're on Windows 10 and it's being blocked by SmartScreen, you can find an option there to run it anyways. Hope this helps a bit!

So i don't know if this is a feature,

but you can stand on the trees and the roofs in the map.

This means that you can't get hit by normal snowman's...

I don't know if you made this in Unity but you can fix this by making the colliders taller.

It's a feature and it actually has some countering with the throwing snowmen. ;) It's just up to you if you want to stay up there for long, if you find that fun.

This is exactly what the doctor ordered this christmas, well done!

Looks like you got a whole lot further than we did in our play-thru , then again we don't normally play FPS shooters...   We enjoyed watching you play :) 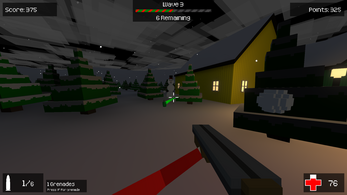 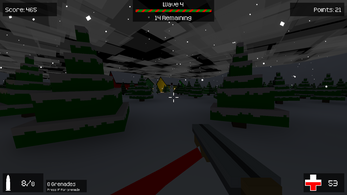